Designed by: Inès Bacardit and Torrens and Mavi Gil i Rafart (Spain) 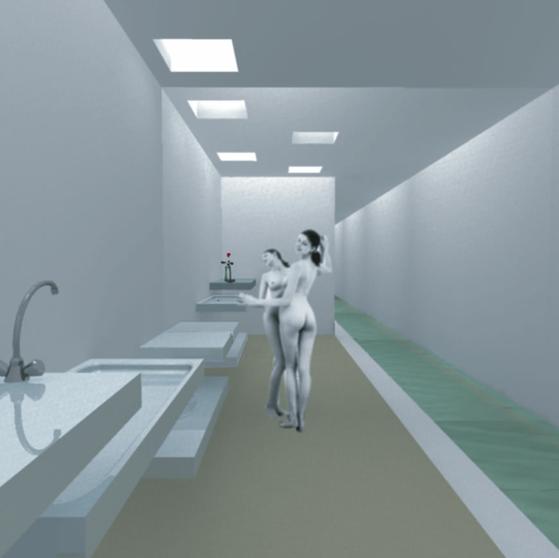 Never-ending Bath is an infinite space that conveys the sensation of a lake that never ends. With two mirrors, the water runs beyond the bathroom’s limits and disappears behind the walls. So then the space sensation becomes more acute, unlike the minimal spaces of today’s cities. The priority of this bathroom is the sensations. We have thought of a bathroom as a group of emotions and freedom. So we have played with the sensation of spaciousness produced by the reflections.

Consequently, a geometric game becomes the toilet zone. Playing with the different heights of each piece, we have designed four flat surfaces in which we have placed the toilet’s components. They have been placed longitudinally with different heights and they repeat once. In such way that, with the mirror, we have been able to offer a game of minimum geometries and make the sensation of spaciousness more potent.

The water becomes the principal material as a metaphor of hygiene and health, contrasting with the hardness of the city’s materials. This water runs on to the infinite.

The space has been divided in three parts longitudinally and it has been delimited by two mirrors. The front mirror takes up all the space of the front wall. On the other hand, the other one, which is placed on the entry wall, only takes up the water space so the only thing that is reflected infinitely is the water. The rest of the walls are made with Pladur® painted white.

The toilet zone has a length of 4.28 meters and a standard width of 60 cm. This space has been constructed in one material: porcelain. Four horizontal surfaces have been placed at four different heights. Two of them are for toilet use (the washbasin and the lavatory). The other two have variable use for storage of the different utensils for the toilet and bath (towels, toilet paper, etc.). Every surface has a length of 1.5 meters except the last one, which is 75 cm. Therefore, with the frontal mirror reflection this last surface becomes one and gives continuity to the whole zone. The left wall of the toilet zone is separated 25 cm from the existing concrete wall so the drainpipes and the lavatory cistern can be placed in this space.

Between this zone and the water zone, there is a paved zone (1.5 m x 4.28 m), constructed with a coated pastel marble. This part has only one function: to distribute the space.

From this pavement, a step goes up, making it easier to enter the water and introducing the new zone. This part has the same length and width as the paved area. It is constructed in porcelain but it is filled with water. Inside the bath there are three green lights that tint the water’s surface when the bath is full.

The illumination is never visible. Some square holes into the second ceiling let the light enter the bath, simulating natural light. The bulbs are placed in this space between the two ceilings. So we have a free space, where water and porcelain play the lead roles.

Liquidlux
No bath-room, just a bath